A short-film. (which loops)
Water was made to be part of an installations-project at the theatre Bora Bora in October 2011.
In our performance the film is without sound, as we in the performance have background noises.


"The idea was to make a short-film in no more than 24 hours. Helene and I thought of the concept for the whole installation one day over dinner, and our first idea was that we wanted it to be little like those silent-films, but with a focus on water. Moreover we liked the swimsuits from the 20's and so we were inspired and came up with the idea for this film...."
- Julie Brøgger

This is a message about Water

This performance/installation was made as part of Århus Culture night, celebrated with dance at BORA BORA in October 2011.
It is inspired by the showers, the room, by questions concerning water, how we use - and misuse it, on synchronized swimmers and more.

"loved to be guided in with other people, who were all excited, and not knowing what would happen to see the film and wondering what it meant, to find three of you in the fog in the small room, see you dance and put marks of yourself on the glass pane. We talked a lot about how it should be understood and loved that it was so unpredictable and strong".
- Journalist/ Poet Line Hassal Thomsen.


The title 27 refers to rock-legends such as Janice Joblin, Jim Morrison, Kurt Cobain and Jimi Hendrix, who all died at the age of 27. All did they burn and burn out and all did they have the courage to seek the limits of their life and art, in danger of failing.


27 a fusion of dance, theatre and performance.
27 is an artistic study of the dilemma between standing by one-self and escaping one-self.
27 is about the artist who uses and abuses his life and the beauty which is created in this dilemma. 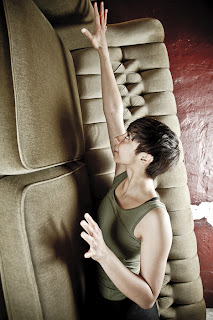 NABO
Nabo is the Danish word for Neighbour, which is the subject discussed when this piece is performed in living-rooms around the country (of Denmark).
NABO is about the people you don't want to meet, the people you secretly lust and it is about ideas, prejudice, hate and love. All is put to form and motion in a short duet, which the news-papers have called "intriguing" as well as "Innovative".

"Two dancers from Filomusi Productions, will throughout the festival invite to a thoughtful and entertaining performance in your livingroom, your kitchen or maybe even on your lab."
- Århus Stiftidende


"It was so totally cool"
"I didn't know dance could be like that."
"I haven't been able to see a performance since my legs got old, this was amazing - thank you." -
Lady in a wheelchair.
"Wow" - girl, 3 years old.
- Comments from the audience, the neighbours, who we had the pleasure of visiting during the festival.

" THAT is exactly how it is in my neighbourhood." (when we performed at a church dinner)


This performance was funded by Aarhus Cultural Department. 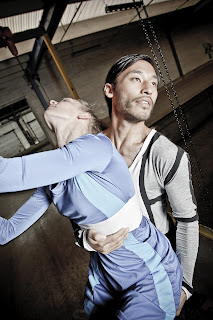 The Sleeping Man
This Choreography is inspired by the religious art of Danish multi artist Bjørn Nørgaard as well as from some of the stories in the Bible. Especially the Sculpture "Das Schalfende Man" from 1986/87, which the performance is also named after, has been of great inspiration. The story takes place before the sculpture is friezed into the sculpture that it is. What led to it becoming the sculpture and what ideas does the dancers and choreographer achieve from it? Why does some go through life with their eyes closed, accepting instead of demanding? - And what affect does love and manipulation have on man? This is all questions asked in The Sleeping Man.
Choreography: Julie Brøgger
Dancers: Natalia Vik, Joy Anna Hall & Simon Beyer-Pedersen
Music: Katumba Alighandhi
Costumes: Ben Boutros
Duration: 16 minutes.
Premiere: April 29th 2010 - Århus, Dk

How to connect the art scenes...

We, who are a part of Filomusi Productions, wish to expand the art scene of Aarhus and connect despite of genres? And as we might have some ideas it is commonly known that 2 brains think better than one, so we are always keen to hear about ideas that can help us connect. If you're out there and have an idea as to how music, theater, videography, dance, art and poetry can become one, write us and we will take it in to consideration on our next board meeting.
Thank You